Working Lives started as an accidental act of voyeurism. An Uber driver revealed to someone on our team that he usually slept in his car around Ikeja in order not to miss out on the highly lucrative early morning trips to the Island. Someone else wondered what other tit-bits we could uncover about Uber-driving. Thus, Working Lives was born.

The next series of interviews was about women selling fish in Makoko around Yaba. Since the first edition in February 2020, we have done 80 Working Lives interviews. WLS reveals the “backend” of various jobs and the “backstories” of the Nigerians in the vocation.

How many of the professionals taking Uber trips to the Island are aware that their driver slept in the car? The “inside peep” into the occupations is often as interesting as the stories about how people came into them and their family backgrounds. The interviews also tell a lot about how the Nigerian economy functions (or malfunctions), for instance about regional income disparities and the often surprising saving habits of low-income workers.

We have brought you 10 of the most-read Working Lives interviews.

1. Working Lives: The Mai Shai Who Was Set up By a Lekki Madam

“She discovered I was sending almost everything she paid me back home. So one day she told me to look for something I could do that would bring me extra cash. She also told me to ask another of my siblings to join me in Lagos so he too could start helping the family and ease our parents’ burden. She then gave me N50,000:00 on this blessed day and told me to start the Mai Shai business.” 2. Working Lives: The Uber Driver Who Prefers Cash to Sex

“I have also experienced carrying girls and when it is time to pay, they try to bribe you with sex. But I know some of my friends who are very happy to accept payment in kind from ladies.” “Immediately the government announced that we should all stay indoors for two weeks, my mom just called me on that Sunday and ordered me to come home. I love my mom so much. I always obey whatever she says. No matter how much of a street boy I think I am. So, during the whole lockdown, there wasn’t really any worry about surviving. My mom was there for me.” 4. Working Lives: The LASTMA Officer Who Was Dropped Inside By Mummy’s Parachute

“There was one time like that when some set of hoodlums wanted to beat just because I stopped a danfo bus that was passing the BRT lane. I was the only one on duty; my colleagues were yet to come so it was easy for them to bully me. I hated that day.” “A lady came into the store while I was working in Italy and told me when I tried to attend to her, “black man, what do you know”.  She made a scene when I told her politely to stop insulting me. My supervisor had to step in to calm the situation.” 6. Working Lives: The Mallam Who Specialises in Yahoo Yahoo Dollars

“Those guys process money every day. They often connect me to more of their friends because I always get everything done on time. And with that, I get cut from the deal. I know what they are doing is illegal but I always like doing business with them. It’s very profitable.” 7. Working Lives: The Banker Who Encountered a Chinese Man with Ekiti Accent

“I once had a caller requesting that his daily transaction limit be increased to N3 million. He had the correct answers to all the authentication questions but at the point of granting the request, I noticed that the account carries a Chinese name while the caller had an unmistakable Ekiti accent. We called the domicile bank and truly the account belonged to a Chinese man who we are told had not stayed long enough in Lagos to acquire an Ekiti accent.”

8. Working Lives: The Kidney Specialist Nurse Who Trained in 3 Continents

I used to hawk stuff for my mother.  I followed her to the market to sell anything she bought from the north. We sold the bulk at the market and hawked whatever is left in the neighbourhood. But this did not stop me from attending school. I hawked palm oil in the morning before going to school, I would then rush back home when it was almost 8 o’clock to change into my uniform and leave for school.” 9. Working Lives: The Street Sweeper Whose Dad Is a University Lecturer

“My dad is a lecturer at the University of Ado Ekiti. My mom is a trader. I know you are wondering why I could not further my education since I have an educated father. Well, my dad and mom are divorced. I was living with my mom and my stepfather. The family didn’t have extra money to send me to university.” “I started learning the trade under my uncle when my father died and I could not further my education. … God has blessed me immensely. I have been able to build four houses- two in the village and two here in Lagos. I also bought this complex where my shop is currently.” 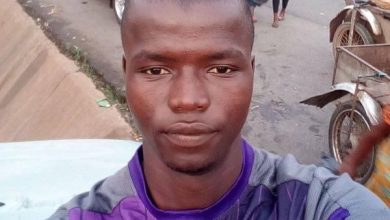 Working Lives: The Mai Shai Who Stepped up From Picking Scrap Metal 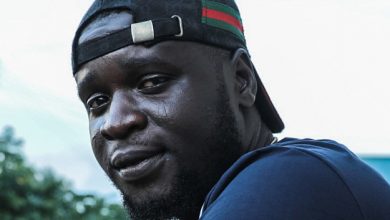 Working Lives: The Market Porter Who Was A Butcher and Is Also a Washerman 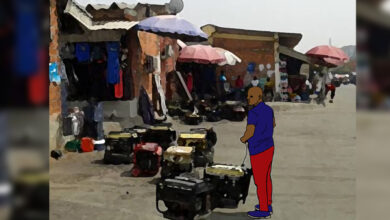 Working Lives: The Delta Man who wants to sell his Generator Business to his Son 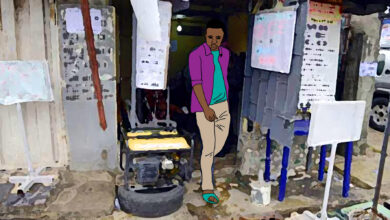 Working Lives: The Generator Seller who used to work as a Motor Boy